Women must understand that they can be at higher risk for addiction than men. Drug rehab for women can be a safe space for them to recover.

Historically, men have higher rates of drug and alcohol abuse than women, but the gap has closed in recent years. Studies show that as many as 6% of women in the United States reported struggling with drug or alcohol abuse. This represents an increase of 2-3% in the last decade. In recent years, the number of women experiencing a drug overdose has climbed steadily as well.

From 2000-2010, about 48,000 women died of a known prescription drug overdose in the United States. However, that number was matched in just five years from 2010-2015 and the rate has shown no sign of slowing down.

While drug abuse has historically been seen as a male-dominated problem, it is important for women to understand they are not immune. In fact, they can be at an even higher risk for addiction than men. Drug rehab for women can be a safe space for them to recover.

The rise of awareness of women’s substance abuse has led to an increased understanding of why women are at risk for so many addictive behaviors. Research shows clear differences between men and women in several important areas. Generally, women consume less alcohol than men when they drink. Women also tend to drink alcohol less frequently than men and thus are less likely to develop alcohol-related issues.

To some degree, this also holds true for drug use. While women are less likely to try illicit drugs, they are increasingly more likely to be prescribed addictive pain medications. Women report significantly higher rates of chronic pain (headaches, muscle aches, postpartum pain, and mental health issues) that can lead to a higher likelihood of using. This can also lead to the development of an addiction to prescription drugs.

However, more research is showing that women can develop substance abuse issues at a significantly faster rate than men. This phenomenon is called “telescoping.”

This also holds true for drug use. Women are less likely to use illicit drugs and develop drug-related problems. On the other hand, when women do develop substance abuse problems, they typically develop them faster than men do. This is called telescoping.

How Do Men and Women Experience Substance Abuse Differently? 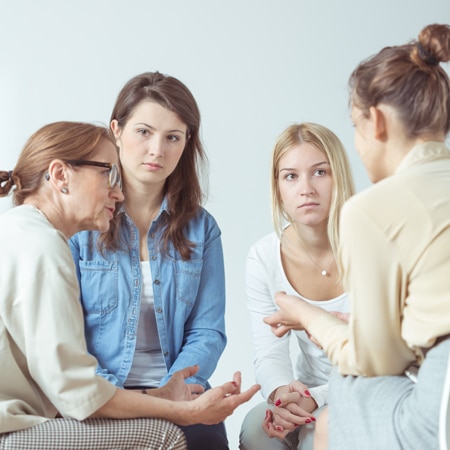 Below are some key differences in how women and men experience substance abuse.

Like many other demographic subgroups, women will experience addiction and recovery differently than their male counterparts. This is due to both biological and societal factors that can play a large role in addiction and the recovery process.

Substance use disorders progress significantly faster in women than in men. Women are also more susceptible to craving and relapse. The unique physiology of women’s bodies is such that women metabolize drugs and alcohol differently than their male counterparts. Women have fewer stomach enzymes and often have more fatty tissue. This can cause their bodies to be exposed to higher levels of addictive substances for a longer amount of time.

In the United States, women have generally experienced higher levels of stigmatization around substance use. This probably stems from their traditional societal roles (or stereotypes) as steady, motherly, level-headed caregivers who are the center of healthy family units. However, like in the U.S., women worldwide are becoming more and more a central part of the workforce, and these gender roles are being challenged. With this increase in work-related stress, women are consuming more alcohol and drugs. As a result, the levels of use and addiction are slowly catching up to those of men.

As more and more women are developing substance use disorders, they’re finding multiple unique barriers to accessing helpful treatment. Women are also statistically less likely to seek treatment (due to the aforementioned societal stigmas) than men. However, women have proven more willing to seek treatment for mental health disorders. They’re also generally more likely to go see a doctor in a primary care setting than men.

There are several gender-specific difficulties that women face when accessing treatment.

With addiction comes shame, guilt, and unavoidable harm to loved ones. Women report feeling these emotions at significantly higher levels than men, and they’re significantly more likely to feel ashamed for developing an addiction.

Historically, addiction in women has been considered a selfish, moral failure. This is due to the residual harm that can befall children and extended family and the burden this can cause. However, women must understand that addiction can happen to anyone and it is a treatable medical condition that can be tackled with the proper help.

A significantly higher portion of women with substance abuse disorder has been victims of physical, verbal, emotional, or sexual abuse. Between 50% and 90% of women in treatment have had some form of traumatic experience or abuse. Survivors of sexual abuse develop an addiction at significantly higher rates than the general population. They are also much more likely to develop post-traumatic stress disorder (PTSD) and thus experience depression, anxiety, or other mental health difficulties.

Experiencing a substance abuse issue in conjunction with a mental health disorder is referred to as a co-occurring disorder. Trauma is a gateway to substance abuse but these issues can be helped with competent, professional care.

Women are significantly more likely to have an economic barrier to proper addiction treatment. Women experience gender-based pay gaps, lower wages, and a higher likelihood of living in poverty. These issues limit the financial resources available to those seeking treatment. Thankfully, many local communities are beginning to provide comprehensive services for women including childcare, housing, transportation, and income support.

Being a mother or father certainly complicates life in general, and this is especially so with mothers seeking treatment. As many as 70% of women entering addiction treatment have at least one child. Women are significantly more likely to be primary caregivers, whereas most men entering treatment do not have sole custody or responsibility for their children. Thus, women are much more likely to experience difficulties attending treatment sessions regularly and many women cite consistent childcare as their top barrier to attendant treatment. Women with children are also fearful of legal action or child welfare involvement with their children and thus many refuse to seek help.

While addiction is a formidable foe, thankfully there are increasingly more treatment options available for women today. While not every woman will require a female-specific treatment plan, it’s important for you or your loved one to do your research and decide which options may be right for you. 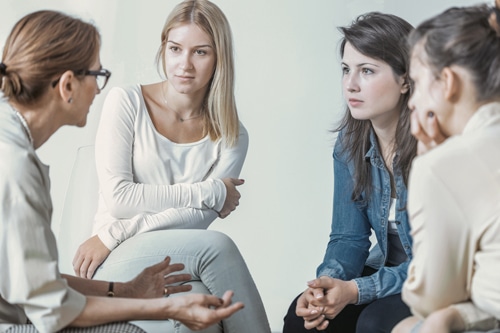 Inpatient rehab for women involves an “on-campus” treatment experience. This focuses on holistic healing and addresses mental, physical, emotional, and spiritual healing for women seeking substance abuse treatment. There are women-only, inpatient treatment options in all 50 states and most countries, so women should have many great options at their disposal no matter where they live.

Female-only, inpatient treatment can be a great option for those coming from abusive homes/ relationships or recovering from PTSD/sexual trauma. Many women deal with the trauma that is related to men in their lives. A gender-specific inpatient treatment option gives them the freedom to recover away from environmental triggers and uncomfortable situations.

Inpatient treatment options for women allow for full supervision and the ability to address co-occurring disorders in a comfortable, stress-free environment. This reduces the risk of relapse and stress-related behaviors and gives patients the ability to truly focus on recovery.

Outpatient therapy gives women the opportunity to still attend to parenthood and other responsibilities that life may throw at them. This option allows women to attend therapy sessions for a few hours a day or even attend treatment virtually. This option is better for women with shorter treatment windows and less likelihood of relapse.

Despite the convenience, outpatient rehab for women can still be an effective way to approach addiction treatment. Many of the same therapeutic techniques, 12-step programs, and facility perks are available in an outpatient setting. The convenience and accountability of an outpatient therapy program may be just what you or your loved one needs to overcome the addiction hurdle.

Addiction Intervention Can Help You Find Drug Rehab for Women

If you’re looking for a quality rehab for women, Addiction Intervention can point you in the right direction. We have access to many treatment resources that can help you. Contact us now to speak to a specialist.