Identifying The Signs of Meth Addiction

Methamphetamine, or meth, is a highly addictive stimulant drug that affects the... 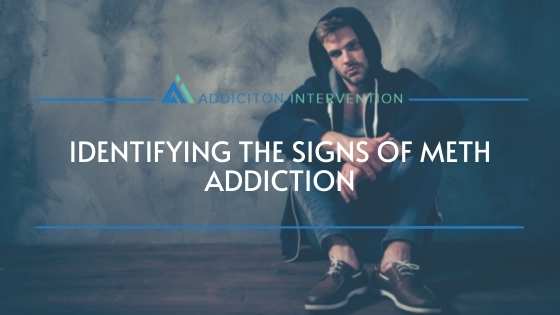 Methamphetamine, or meth, is a highly addictive stimulant drug that affects the central nervous system (CNS) of the brain. Similar to amphetamine, methamphetamine causes increased talkativeness and activity, decreased appetite, and a sense of well-being or pleasure. However, it causes long-lasting, harmful effects on the nervous system.[1] Unfortunately, many people in America have fallen victim to meth addiction.

The extreme psychological and physical toll that meth causes to an individual’s body makes it one of the most dangerous and potent drugs known to man. Because of the severe effects meth has on a person’s brain and body, the symptoms and warning signs of meth addiction are visible in a number of ways. One of the first and most obvious signs of addiction includes a sudden loss in areas of interest in a person’s life. While many people attempt to hide their meth abuse, the longer an individual uses meth, the more prominent the signs of drug addiction become.

Let’s take a look at the signs of meth addiction, the risks of meth abuse, and how this substance use disorder is treated.

Individuals who abuse meth will display characteristic symptoms that signify methamphetamine abuse. As previously mentioned, meth quickly takes priority in an individual’s life. Additionally, meth chemically alters how a user thinks, feels, and behaves. Oftentimes, the person’s hobbies, career, social interactions, and goals will take a back seat to the act of obtaining and consuming meth.

People who abuse or are addicted to meth commonly exhibit behavioral and physical symptoms. The most common signs of meth abuse include:[2]

One of the most classic signs of meth abuse is known as “tweaking”. Tweaking is best described as a period of anxiety and insomnia that may last from 3-15 days. This occurs at the end of a meth binge when the person cannot achieve a rush or high anymore. Tweaking may cause paranoia, irritability, and confusion. Additionally, some people hallucinate and become violent while tweaking.

If you or a loved one are experiencing the mentioned signs of meth abuse or addiction, seeking professional help is vital.

The Risks of Meth Abuse and Addiction

The health risks of using meth are widely known, however, many people continue to experiment with the drug. Users experience a euphoric rush that is caused by the release of the neurotransmitter dopamine, causing people to continually abuse meth. This drug is more dangerous than other stimulants due to a larger percentage of the drug remaining unchanged in the body. Unfortunately, this causes meth to stay present in the brain longer.

Meth is extremely toxic to certain nerve terminals in the brain, which can destroy the brain cell synapses where dopamine is released. When dopamine is not being produced naturally, mood disturbances and dependence on meth become common.

Also, the prolonged abuse of meth commonly changes the brain chemistry of users. As a result, the wiring in the brain’s pleasure center is destroyed, making it increasingly difficult to experience pleasure without the drug. In addition to behavioral changes, chronic meth use also causes irreversible damage to bodily systems and blood vessels in the brain. This may result in a stroke.[3]

If meth abuse is heavy and frequent over a long period of time, the brain will begin to rely on its effects. This dependence then turns into an addiction. Addiction is one of the most dangerous long-term effects of meth use, as it leads to years upon years of meth-related incidents and health effects. The additional possible long-term health effects of meth may be divided into physical and psychological categories.

The possible physical effects of long-term meth addiction include:[4]

The long-term psychological effects of meth use include:[4]

Meth addiction is one of the most severe and complicated substance use disorders today. The physical and psychological effects of meth dependency may be mild, moderate, severe, or even life-threatening. However, individuals can recover from meth with the help of professional addiction treatment tactics and programs. Medical detox should be the first step in anyone’s journey of meth addiction recovery. After detox, it is important for individuals to attend residential treatment to address the psychological aspects of their addiction.

With the combination of medical treatment, individual therapy, group counseling, aftercare programs, and relapse prevention plans, people will make a full recovery from meth addiction. If you or a loved one are in need of treatment for meth addiction, contact Addiction Intervention today. We can help you get started at a reputable and evidence-based addiction treatment center.