Throughout history, marijuana has been used to achieve many different outcomes. However, it’s difficult for some individuals to understand marijuana and its uses beyond getting high. There’s a lot of questions surrounding marijuana and its benefits. While some become addicted to it, others continue to use it recreationally while it has little effect on them as far as developing a dependency is concerned.

Some claim it’s relaxing and helps them feel less anxious while others find it uplifting and creatively stimulating, so what’s the deal? Is marijuana a stimulant or a depressant? Truthfully, it has characteristics of both. Not only that, but its effects vary depending on the person using it.

How Do Stimulants and Depressants Work?

Stimulants and depressants are two completely different kinds of drugs that have two completely different functions. In layman’s terms, one drug makes a person attentive while the other makes them relaxed. However, there’s so much more to all of this than just being more attentive or relaxed; while the functions are simple concepts to explain, the science behind it is very interesting.

How Do Stimulants Work?

Stimulants work to increase someone’s attentiveness and cognitive brain function, but how is it done? The answer is quite simple: by increasing the neurotransmitters dopamine and norepinephrine in a person’s brain. This allows someone’s concentration to increase while their fatigue, lack of energy, or drowsiness decreases.

Those who take prescription stimulants like Adderall or Ritalin usually do so to combat attention-deficit hyperactivity disorder (ADHD) or other attention disorders. Many people throughout the United States take stimulants to focus better. In some cases this is beneficial, but in others, it could lead to a dangerous addiction.

How Do Depressants Work?

As previously mentioned, depressants are substances that relax an individual. These drugs are the most widely used in the world; their function is to restrain the central nervous system. These kinds of drugs, whether illegal or prescription, have the potential to become very addictive. Depressants aim to affect neurons in the central nervous system to induce drowsiness or relaxation. Typical depressants include alcohol, opioids (heroin, codeine, fentanyl) and benzodiazepines, or sedatives.

Based on their results, psychoactive drugs can be placed into three different categories:

Many people have speculated as to where marijuana falls in these categories, and the answer is quite simple. Marijuana can be used as a depressant, stimulant, and hallucinogen. Marijuana also has medicinal characteristics, allowing it to be an analgesic, anti-nausea, and anticonvulsant. 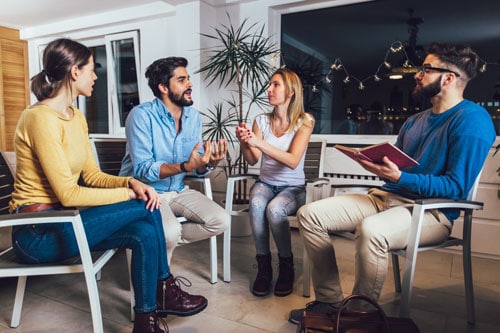 Before it can be determined as to exactly how marijuana is classified as depressants, stimulants, and hallucinogens, it is imperative to know exactly what marijuana is. Marijuana is derived from the cannabis sativa plant. This plant is highly complex, possessing more than 500 natural chemical compounds. These chemical compounds include cannabinoids, terpenes, and flavonoids.

Is Marijuana a Stimulant or a Depressant?

Some strains of this substance act more like a stimulant while others a depressant, and others a hallucinogen. Whether they cause euphoric feelings, feelings of relaxation, or feelings of distorted realities, it all depends on the strand and cannabinoid profile. Is marijuana a stimulant or a depressant?

How is Marijuana a Depressant?

Marijuana influences the messages to the brain and the body to move significantly slower, thus categorizing it as a depressant. The substance increases the levels of gamma-aminobutyric acid (GABA) in the brain when it enters a person’s system. In short, this GABA blocks signals to the brain and dumbs down activity throughout the central nervous system.

Because of this, breathing and feelings of relaxation overcome the body; these effects are common in depressants. This is why people may use marijuana for things like anxiety, depression, insomnia, etc.

These aren’t the only effects marijuana can have, however. The substance can also have the following effects:

When depressants are taken in high doses, they can possibly result in cardiac arrest or even death. This is especially true for people who suffer from a pre-existing heart condition. However, reports in the past have proven that fatalities as a result of marijuana usage are rare.

Some examples of depressants other than marijuana include the following:

Developing a tolerance to depressants is possible through frequent use. This is important to know because using marijuana or any other depressant frequently could lead to needing a higher dose, which also allows people to become addicted.

Dependency can come in many forms, some of which include socializing, sleep, work performance, etc. Experiencing withdrawal symptoms such as vomiting, fatigue, nausea, headaches, and difficulty sleeping are also common when becoming dependent on a depressant.

How is Marijuana a Stimulant?

As mentioned before, stimulants increase a person’s attentiveness and cognition. More specifically they speed up neurotransmitters like dopamine, serotonin, and norepinephrine. This helps improve a person’s focus, mood, and attention.

Stimulants, in layman’s terms, do the opposite of what depressants do. For example, if a depressant relaxes someone and allows them to combat stress, a stimulant speeds up their central nervous system’s activity significantly, increasing heart rate, blood pressure, etc. making them more attentive and energetic.

Some of the side-effects of stimulants include the following:

Marijuana is considered to be a stimulant mostly because the high it produces gives a user a sense of euphoria. Some believe this to be the cause of dopamine. Some substances have the same effect such as coffee, nicotine, amphetamines, methamphetamines, and cocaine.

While substances like methamphetamines, amphetamines, and others are stimulants like marijuana, they are far riskier than marijuana is. Those drugs are highly addictive, and while marijuana poses a risk for dependency, it’s not quite as risky as other stimulants.

How is Marijuana a Hallucinogen?

Hallucinogens are substances that can radically change a person’s sense of what’s true and what’s not. When someone is under the influence of a hallucinogen, their sensory perception is heightened. For example, someone may see colors more vividly or their hearing or touch may be more sensitive than usual. One of the most dangerous parts concerning the use of hallucinogens is that these substances disrupt the messages from the brain to the body (more specifically, the disruption of serotonin to the brain).

Over the years, marijuana has held the notion of influencing hallucinogenic effects. The most interesting part about this is that the majority of those who have used marijuana rarely ever experience hallucinations. Hallucinations only happen when marijuana is high in tetrahydrocannabinol content (THC).

Hallucinogens can cause the following:

Usually, when a drug is considered safe it means that it doesn’t result in dependency or addiction. Hallucinogens have been known to cause long-term issues such as mental health disorders and memory loss. Sometimes hallucinogens have caused psychosis, flashbacks, and another condition known as Hallucinogen Persisting Perception Disorder.

Variables of Marijuana Use

There is a multitude of variables to consider when identifying whether or not cannabis acts as a depressant, stimulant, or hallucinogen. These effects are dependent on three variables:

The first factor of how marijuana affects an individual is the drug itself. This means the cannabinoid, terpene, and flavonoid profile. Not only that, but the strain, method, and dose factor in greatly with how a person responds.

Another factor of how marijuana may affect a particular individual is the user. A person’s age, gender, weight, and other specifics of any given individual will influence how marijuana affects them. Many who try marijuana for the first time are sensitive to THC; this is quite different from those who have built up a tolerance for it. A person’s genes can also be of influence, especially when hallucinations are more likely in a particular strand of THC.

Shockingly enough, someone’s environment could influence their reaction to marijuana greatly. This may be hard to believe, but it’s entirely possible. If someone is home alone the substance could be more controlled because the individual knows what they have, but if they were at a party or concert they may not realize what they’re ingesting/smoking.

Find Out More and Get The Help You Need Today

At the end of the day, whether marijuana is a stimulant or a depressant, it is still a substance that has the potential to be misused. This drug is very popular because it alters the mind to feel more relaxed or stimulated, but if an individual isn’t careful, it could have dangerous side effects.

Different people respond in various ways to substances of abuse. The reaction of any particular individual could be largely dependent on the specifics of their genetic makeup, height, weight, age, or gender.

There are many treatment centers throughout the United States. At Addiction Intervention, our goal is to help everyone find the treatment they need to get better. We know that people respond differently to the effects of drugs; just as this is the truth, it is also true that they will respond to treatment in various ways. If you or a loved one are suffering from an addiction to marijuana or any other substance, contact us today.